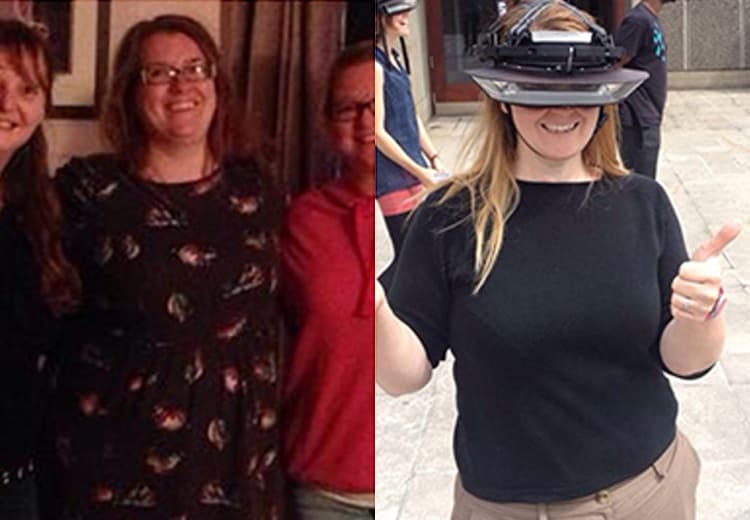 Kelly wasn’t looking to lose weight when she found Noom. It was a few days after Christmas in 2014 when she became curious about how many calories were in the many mince pies she was eating. It felt like standard behavior, she says, to eat that much during the holidays. She decided to try to find how many calories she’d consumed, and with a quick Google search, she found Noom.

Kelly says it only took a week of logging with Noom for her to quickly lose eight pounds. Simply staying aware of her calorie intake helped her stay on track and eat less. She figured out what worked, stuck with the plan, and lost 70 pounds by August 2015.

Kelly says she truly felt very little difficulty in losing the weight. She’s tried many different diets over the past 20 years. Some worked, but none had any lasting effect. She always felt limited in her choices and was never quite sure what the “best” plan was. She says with previous diets, whenever she slightly deviated from her plan or gained some weight back, she would lose all motivation and give up.

She found Noom’s approach much simpler to follow. Kelly felt it was a “common sense” approach to healthy eating. She learned good habits from the daily in-articles and loved the support she found in her Group. The meal log reminders kept her accountable and she loved watching her progress in the weight graph.

Today, Kelly feels much more secure in her own body. She says she no longer minds having her picture taken or seeing her reflection. She’s even more thrilled at how she’s been keeping the weight off. She even finds shopping fun now! She says the change has been beneficial for her entire family: she can now play with her kids easily and help her kids be healthy as well.

Kelly says her physical activity level has also vastly improved. This past October she ran her first 5K, an accomplishment she says would have been laughable just a year ago.

She feels like a different person and she loves that. Her biggest goal now is just to stay happy and active. Way to go, Kelly!