Trim Back the Trimmings 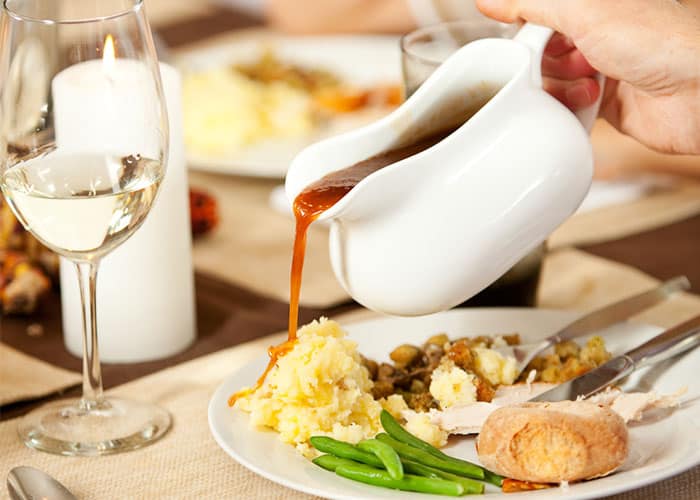 The holiday season is a great time to catch up with family, give thanks, and take some time to unwind (plus, there are presents!). Unfortunately, along with the holiday perks come many meals that can wreak havoc on healthy diets. Americans gain an average of 4 lbs. over the holidays, which is no surprise considering the average American may consume more than 4,500 calories and 229 grams of fat(!!) on Thanksgiving day alone! Knowing this is enough to send waves of panic through anyone attempting to maintain a diet, but fret not. Turkey, stuffing, and pies don’t need to cause stress and send you running for the hills. Check below for some easy way to cut calories out of your Thanksgiving meal.

Turkey and gravy are like Red Beans and Rice — one is not complete without the other. While hopping on the gravy train during Thanksgiving is enticing, traditional gravy recipes are made using butter, white flour, and heavy cream, which means a lot of fat and sodium. If you’re making your own gravy, try a lightened up version instead of a traditional recipe. If a lightened up version isn’t an option, try to keep your portion size to a quarter of a cup (about the size of a golf ball) to keep calories in check.

If gravy is turkey’s significant other, stuffing is its BFF. While stuffing is delicious, just the name implies doom for dieters. But there are ways to keep this dish tasty while reducing calories. Try using low-sodium chicken broth instead of butter, whole grain bread instead of the white version, and 2 egg whites for every egg. To make stuffing more filling without adding calories, add more vegetables. If you’re really adventurous, try using barley instead of bread for a high-fiber alternative. If you’re still worried about overeating, bake stuffing in muffin tins for instant portion control.

Not Your Grandma’s Green Bean Casserole

A typical ½ cup serving of green bean casserole contains 120 calories and 8 grams of fat … And who can only eat ½ cup? Luckily, this dish can easily be lightened up. When available, choose an ingredient’s low-fat alternative. For example, use skim milk or low-sodium chicken broth instead of whole milk. Use fresh green beans instead of canned, and low-fat cream of mushroom soup instead of the full-fat option. If the lightened up version isn’t your style, try something simpler. Steam green beans and toss with olive oil and garlic. This simple and light option will be a nice balance to otherwise heavy sides.

To lighten up mashed potatoes, heat skim-milk mixed with fresh and tasteful herbs (garlic, onion, and chives are some good examples) and use the minimum amount needed to thin the potatoes. If you like your potatoes on the creamier side, try mixing in greek yogurt or low-fat cream cheese.

As a general rule try to stay away from things like nuts, cheese, cream sauces, and butter. They don’t add a lot of flavor yet are very calorie-dense. Eat slowly and try to stop once you’re full. But remember, this is one day of the year. If you splurge a bit, it’s OK. You can get back on track after the holiday.