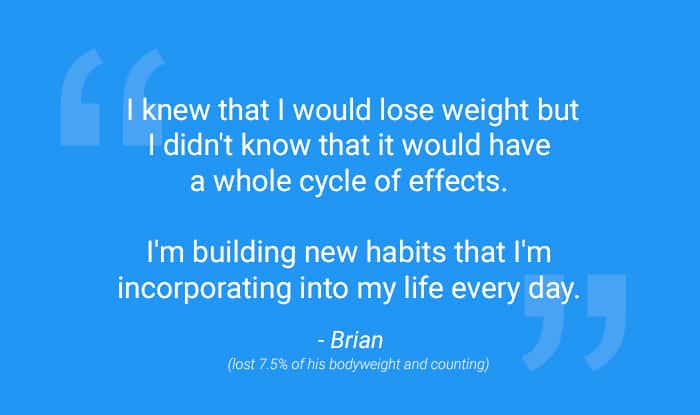 In October 2016, Brian’s doctor sat him down and had “the talk.” After his annual physical, Brian’s blood test results concluded that he was prediabetic. He knew that it was time to do something about his health.

As he considered what to do, Brian received an invitation from his health plan to join a virtual Diabetes Prevention Program, he figured he’d give it a shot.

He entered the program uncertain and somewhat skeptical.

I had no idea what to expect going into the program but I have had such a great experience. At first I did think having a coach would just mean having a cheerleader though, and I’m not sure how I felt about that.

But in the end, working with a personal, professional health coach made all the difference for Brian.

Quickly thereafter it became clear that [working with a coach] was way more than that. After a few discussions, I realized that I could turn to him about healthy habits, exercise, nutrition, barriers, anything really. I had a coach who was knowledgeable, encouraging, and supportive, which kept me active and engaged. I felt a real connection to him and that made a really big difference.

Apart from having a personal coach, Brian also found real value in having the ability to keep logging his food every day.

The single biggest impact was registering what I ate every day and Noom made it so easy to do. It helped me understand how much food I needed to reach my weight loss goals and how to make healthier choices. There are hundreds of thousands of foods to choose from in the database and it really helped guide my food choices whenever it was out to eat — it was great!

Being able to track his progress in one place, at his fingertips, was also a big reinforcement.

To see the cumulative effects of my food choices and how they are impacting my weight and health over time is such a positive reinforcement in making changes.

Brian’s already lost 7% of his body weight, reducing his risk of developing diabetes by over 50%. He’s set a new goal for himself and is continuing to work towards this new milestone.

Overall Brian can’t say enough positive things about his experience and how he’s benefited from his time in Noom’s Diabetes Prevention Program.

My experience with Noom has been so great in so many ways! I knew that I would lose weight, but I didn’t know that it would have a whole cycle of effects. I have asthma and I haven’t used my inhaler nearly as much over the past four months. I feel really good! I’m more active and more willing to be active, and I have a lot more energy. I’m also more confident, so much so that I feel better about myself and am able to be comfortable in environments I haven’t been in before.

Best of all, Brian noticed a big shift in his mindset and realizes that the changes he’s worked so hard to make have become a part of his lifestyle.

I am not on a diet. I’m building new habits that I’m incorporating into my life every day.

Congratulations on all of your success, Brian! We look forward to continuing to follow your journey to better health.

When will you start writing your success story?