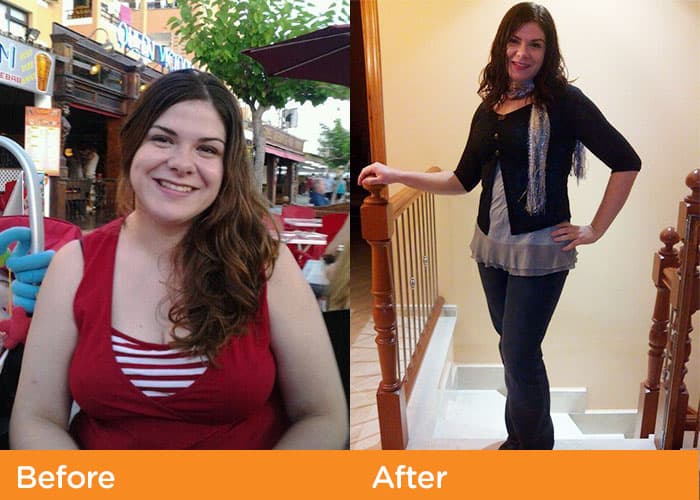 I first started to gain weight after my wedding, when I was working a sedentary job and could not find the time to exercise. I only gained 11 lbs but I found it extremely hard to lose, even with dieting. After my first pregnancy and nursing for 7 months, I found myself hungrier than ever. If I found it hard to work out previously, it was even harder to fit in time to do anything with a new baby! At the time, I was 22 lbs overweight and I felt horrible about myself.

My husband and I wanted to have another child so I tried to lose weight before my next pregnancy. As hard as I tried, I couldn’t seem to lose the weight. It sent me into a shame spiral that seemed to affect all parts of my life. After our second child was born, and after another eight months of nursing, I was 44 lbs overweight. I felt completely miserable and helpless. My body had begun to ache but the worst part was how I felt psychologically. I felt disgusting and I was ashamed of myself.

My husband was overweight as well and he blamed it partially on me for cooking foods high in calories. But I had no idea about calories or which foods were healthy and which were not. In February 2014 I decided to sign up for a gym. After five months of wasted time and money, I had not lost any weight and I was extremely frustrated.

I didn’t want to give up on myself — I just needed to find a way to learn how to lose weight on my own. That’s when I found Noom. It was so interesting, fun, and easy to use! I learned so much about what I was eating — I was shocked at how many calories I had been eating every day! I was eating way too much food. Noom helped me to find and sustain a healthier lifestyle by teaching me how to eat foods that would fill me up and nourish my body. Because I have learned so much, I have been able to help my husband and we are now losing weight together!

Four months later, I’ve lost 22 lbs! Before Noom, I was hopeless. I had no idea you could lose weight without starving yourself. I still have 22 more pounds to go but I now know it’s possible.